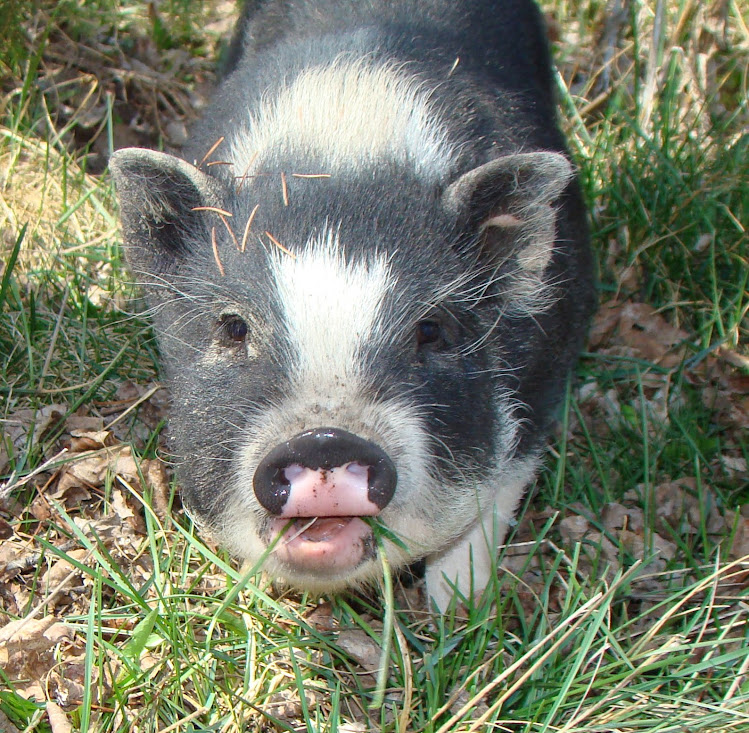 Don't always believe what people tell you when getting a pig!

What continues to amaze me is that I am still shocked by what some people will do and say when it comes to pot bellied pigs. I KNOW BETTER...SHAME ON ME!!! We found out a couple of weeks ago that MacGyver, my rescue pig who was being sold as a butcher pig because he was neutered and therefor of no use to the owners who wanted to breed MORE pigs into this area...is NOT neutered. I've had my doubts all along because he just looks (slightly...which is what threw me) different from my neutered boys, but because I have not had any experience with adult boars, I didn't know what I was looking for...and he was not displaying any of the normal boar traits. Over the last few weeks...maybe because spring is in the air, or maybe it has something to do with my other little rescue female...he has been showing me his true colors. For those of you who have not had any experience with boars, believe me when I say...it's NOT something you want to have to deal with (and it starts very young). Needless to say, tomorrow afternoon, after months of building trust with him, we have to load him up and take him to be neutered. :o(

Once again, I will send my husband to do the dirty work. He trusts me now and I don't want to damage that trust. He's a bit of a man hater anyway (no doubt he has good reasons) and still doesn't quite trust Scott. If Scott moves into MacGyver's space, he will bark at him and back away. He doesn't do that for me. Scott will have to start from square one with him again I am sure. Maybe that's not fair of me...but it's the way it's going to be. I spend more time with them so I win the discussion! Besides, I tend to cry during these things. There's not much out there that breaks my heart like the cry of a terrified pig. :o(

The frustrating part is, we would have taken him even if he wasn't neutered. We would have had him fixed right away and it would be over and done with now. It wasn't necessary to lie. So often this happens with pot bellied pigs. The truth of who and what they are and will become is hidden and people often do not realize what they are getting into. If the truth were told, there would be much fewer people rushing out to get one of those adorable little pigs on Kijiji. We were also told that he was 1 and a half years old. It was obvious just looking at him that he is at least 5. We knew this as soon as we saw him, so what was the point in lying?

Just be aware that ALL pot bellied pig breeders are in it for the money. If they weren't, they would be aware of what is happening and they would not be breeding anymore. They will tell you whatever you want or need to hear to get you to reach into your wallet and pull out the cash. They don't care that you will not be prepared for what is to come, and they don't care what becomes of the pig they sell you. They don't care that adult pigs are almost impossible to rehome and that is what you will be faced with if and when things don't work out for you (because of their lies). I have 5 pigs here now and know of hundreds of others who prove this is true. When I contacted Piper's breeder, she offered nothing. The pig...that SHE brought into this world...was no longer her concern. This is a breeder from Camrose who often advertises her pigs on Kijiji. Her website "looks" very good. Unfortunately, her ethics are not.

PLEASE don't buy from a breeder just because the pictures they post are adorable. Bear cubs are adorable too, but they are not the pet for the average person. Pigs are no different. Those babies grow up fast and don't look like that for very long. Buy from a  pig rescue if you are sure a pot bellied pig is for you. A pig rescue won't lie because they truly care about their pigs, even though they are not the ones responsible for bringing them into the world. You will get the truth, be able to make an informed decision, help the under funded rescues and save a life in the process. What could be better?

Not so pint sized pigs

This is what breeders don't want you to know.

http://www.farmersguardian.com/home/rural-life/country-view/public-warned-over-‘micro-pigs’-ahead-of-christmas/35754.article
Posted by Lorrie Smith at 1:41 PM No comments:

Best Speech You Will Ever Hear - Gary Yourofsky

Thank you Gary!!! Every person on the planet should listen to this. He's a passionate and gifted speaker who really cuts through the crap and points out that wrong is ALWAYS wrong and it can't be reasoned or justified away. BRAVO!!!!

http://www.youtube.com/watch?v=es6U00LMmC4&sns=fb
Posted by Lorrie Smith at 4:54 PM No comments:

Another pig on Kijiji. He's being sold as "a proven breeder" (Grrrrrrr!!!!!) who has outlived his usefulness to his owners. He's probably made them some money and now they are done with him, his needs and how ever many piglets they added to the world. He's "not friendly"...so chances are even slimmer for him to find a good home. He will be sold as food or as a breeder to pump more unwanted pigs into this area. I want so badly to go get him, but I can't. I'm not set up to properly house an outside piggy in this climate (-40C yesterday with a wind chill) and I can't have more indoor pigs. It's killing me to leave him there to face whatever fate awaits him. :o( As badly as I want to have a PBP rescue, I don't think I can. The need is endless and it's impossible to do it alone. I would have 100 pigs within no time...and then what? There will always be "the next one" after that. The feeling that I am having right now will never end. The stories of the rescues that are shutting their doors due to financial need are overwhelming to me. What do these people do with all of their pigs when this happens? The gassing trucks get brought in and they are killed...that's what happens. The best intentions in the world cannot accomplish the impossible. I wish breeders would open their eyes to this. When a market is saturated and animals are being abused, neglected and abandoned and pets are being slaughtered...IT'S TIME TO STOP BREEDING!!!!!!! It's not rocket science. The selfishness and coldheartedness of people will never cease to amaze me.
Posted by Lorrie Smith at 8:39 AM No comments:

All it would take to stop it is for you to stand up for them...

...please don't look and walk away without doing something. They need you.

http://www.youtube.com/watch?v=W94PG1XR5UM
Posted by Lorrie Smith at 4:27 PM No comments:

I will never understand how people see this any other way.

http://www.youtube.com/watch?v=M1q3gvVLCBE&feature=player_embedded#!
Posted by Lorrie Smith at 7:37 PM No comments:

Lorrie Smith
Alberta, Canada
Although I have many animals in my life, I am officially known by family and friends as "The Crazy Pig Lady." Hey, at least I'm not "The Crazy Cat Lady!!!" (No offense to Crazy Cat Ladies!) I live in Alberta with my husband...who shares my love of pigs...bless his heart! I have 24 pigs, all of them rescue pigs. I hope to... in some way, however small...help keep these wonderful creatures from being abused and abandoned by sharing my experiences with my own pigs. I don't claim to be an expert, just someone who loves pigs very much. Hope you enjoy my blog!